Early 1950s memories of Orchid Road and the glorious sump 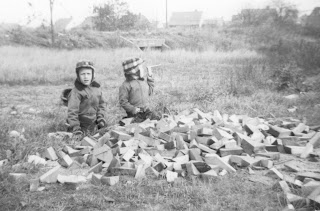 Click on picture to enlarge it
Tim Lavey calls this photo of him and his brother Mitch, "Building Levittown".

My brother Mitch and I lived at 173 Orchid Road, between Skimmer Lane and Violet Lane (about halfway between Jerusalem Avenue and Newbridge Road). The picture was taken in 1950 or early 1951, behind our house before the sump was built.

You can see an old culvert behind my brother Mitch's head. He graduated from Division Avenue in 1965. The houses in the background are probably those on the southern leg of Blacksmith Road." According to Jeff Peyton, class of 1961 and my childhood friend, "The sump was even with, or just south of the Old Motor Parkway, a place to my young eyes that was filled with wildflowers and Queen Anne's Lace, oversized brown locusts, and toads. I loved that place."

I remember one time a whole bunch of us were hiding out around the culverts in the underbrush playing war games in the early evening just as it got dark. My dad sneaked up on us and shouted to wake the dead. I’ve never been so scared in my life. As he took my brother Mitch and me back to our house, I can remember him lecturing us on properly setting up a perimeter to avoid being surprised by the enemy. Dad passed away in 1995 after a considerable struggle with the effects of Alzheimers. I miss him greatly, of course, and so do all those who knew him.

I also have wonderful memories of days exploring the forbidden tunnels inside the sump. We weren’t supposed to be in the sump much less going into those tunnels, but it seems that almost everyone did it. I forget just how far I crawled under the streets of Levittown exploring the sewer system, but I believe I got pretty far north. I remember being somewhat frightened about not being able to back track to the sump after making too many twists and turns into and through adjacent underground tunnels. It would have been exceedingly embarrassing to have become hopelessly lost and then ignominiously extricated by town authorities.

One more thing comes to mind. I recollect that before the sump was built in the very early 1950s that we had major flooding all along Orchid Road during a heavy rain. I think my dad was out back with other dads doing what they could to stop the water from cascading into our yards and houses. I always thought (incorrectly I’m sure) that the sump was built shortly thereafter because that flooding had occurred. It’s much more likely it was already on the drawing board.

Hi Frank, My body left DAHS in '62 for a program at Levittown Memorial, but my soul was always at Division, as we lived around the corner on Butternut. Also OMG!, I lived at "the sump", built forts, climbed the powerline towers on the motor parkway, and played in the unfinished foundation next to Engine Co. 2 firehouse on Hickory La.. Wild blackberries, raspberries and brought home lots and lots of toads...my mother loved that!. I was a denizen of Azalea pool.

My friends and I were also 'sump dwellers!' Ours was on Loring Road just south of the old Howard Johnson's. I remember going far enough in to pass under Hempstead Turnpike where you could hear all the traffic up above. The fear of getting lost in that maze of sewers usually was enough to keep us from going too far.

Shows you some differences in how girls and boys played and probably, were allowwed to play! Any girls play in the sumps? Not me - but sounds like fun! PS to Bob, I also lived on Butternut, but on the other end, 99, and would have graduated in '63 if we hadn't moved in '61. Is Phyllis your sister? Kathy Stahlman Zinn

My sump was the one across the street from where Pintail Lane School used to be. It usually had water in it (not anymore) and one winter we discovered it was full of carp and goldfish! Imagine hundreds of kids catching fish thru the ice.

It was also a great place to go sledding.

I believe what you call a "culvert" may actually be one of many highway overpasses built for the Motor Parkway. They had one over Newbridge and Wantaugh Ave too. Some were in the middle of no where so farmers could get to their land on the other side. Vanderbuilt wasn't being nice, it was a condition of sale when he bought the land.

I read this paragraph completely concerning the comparison of latest and previous technologies, it's awesome article.

Heya! I just wanted to ask if you ever have any trouble with hackers?
My last blog (wordpress) was hacked and I ended up losing months of
hard work due to no back up. Do you have any methods to protect against hackers?

Click on any of these topics to see previously posted stories